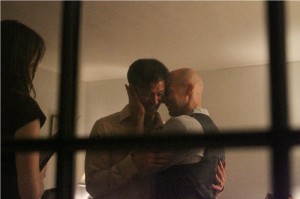 Married and Counting is a documentary film by Allan Piper.  It follows Pat Dwyer and Stephen Mosher as they celebrate 25 years together by traveling to all the states in America where there is marriage equality and, once there, they tie the knot.  The film is a statement about the lack of, and need for, equality in America; but it is also a good old fashioned road movie, as well as being the most old fashioned of all pictures — a love story.   Viewers have a chance to see an actual face put on the issue of equality.  Here is a couple who, after a quarter of a century, are more in love than ever.  Their simple wish is to be married.  To set a standard, to illustrate the absurdity shown by the lack of equality, to show people young and old, gay and straight (or otherwise!) that two people (whatever their gender or sexual identities) can be so in love for so long that their only dream is one of marriage, Stephen and Pat throw themselves 7 weddings.  Each wedding is unique, fun and filled with love.

The idea for MARRIED AND COUNTING came out of a conversation of levity during a party.  After many months of talking about this idea of multiple weddings, after buying their own video camera to shoot the weddings, Mosher and Dwyer found themselves with a renowned film maker, Allan Piper, who wanted to join them in producing this film.  Piper directed, shot and edited the movie with the assistance of friends, colleagues and a lady named Jennifer Houston who, upon completion of the film, would become his wife.  A musician, singer, songwriter, actress and baker (who provided all the wedding cakes!), Houston provided some of the incidental music for the film, as well as the original song Let It Begin, which she performs at one of the weddings.

With a cast and crew that features all of the friends and family of Pat And Stephen, the film has been touching hearts and inducing tears.  The film did the festival circuit and is now available on itunes and amazon.  Much excitement was created with the addition to the cast of the respected and revered actor George Takei, who does the narration of the film.

You may watch our trailer HERE.

Pat And Stephen and Jennifer and Allan were joined by some friends and family (some of them, members of the cast of Married and Counting) on August 11, 2012 for the World Premiere of the film at the Rhode Island International Film Festival.  While there, the movie was presented with two honours:  The RIIFF International Ambassador Award, presented to a film maker whose work fosters communication, education and cultural understanding; and the RIIFF Youth Jury Award for Best Feature Film.  On hand to accept the award were the two (extremely) grateful grooms.