Stephen Mosher On Elizabeth McGovern and Time and The Conways

I love surprises in the theater.   It’s so exciting to sit in the seat, knowing nothing about what you are about to see.  That is why, unless it is Shakespeare, I try to read as little as possible about a show before seeing it for the first time.  It’s an opportunity to have a completely fresh  world unfold before you as you allow the artists to take you on a journey entirely new.

That was me at Time and The Conways at The Roundabout Theatre on Broadway.

Weeks earlier Pat heard me shout from the other room and he came running.  I was jumping up and down.  Elizabeth McGovern was coming to Broadway!  I had loved her since I was a suicidal teenager sitting in a theater in Switzerland watching the movie Ordinary People for the 16th time.  My first suicide attempt had been at the age of 13, a feeble and unsuccessful attempt on my life that left me humiliated and embarrassed and in the hands of barbaric therapists who wanted to do terrible things to my head and my heart.   Upon my first viewing of the classic film, I felt I had a buoy, a beacon of light in the darkness, and I devoted that heart to each of the artists responsible for this cinematic life saver that kept me going in dark times.   Elizabeth McGovern was one of those artists.

I found myself in college, still troubled but less suicidal, and in a year or two I was able to rent to own my very first vcr.  Thanks to cable and vhs tapes I was able to investigate the growing CV of this young actress who had captured my eye.  Particular performances that reached inside of me and either flicked an ‘on’ switch or grabbed hold of my heart were Ragtime and She’s Having a Baby.  From Once Upon a Time in America to Bedroom Window she captivated me.  Even in a silly little comedy called The Favor, she stood out in my memory for years, yelling at Brad Pitt about how his use of her lipstick to draw her would cost her a fortune because of one trip to the makeup counter.    She was luminous on TV in The Scarlet Pimpernel and charming in a failed sitcom If Not For You.  As time went on, though, I noticed less and less of her in my movie going experiences.  Eventually, I heard she had immigrated to the United Kingdom.  This was before the internet, when everything could be found online, and seeking out Elizabeth McGovern movies could be complicated.  But when IMDB came along, then all the On Demand capabilities, I was all over everything I could see, and delighted to discover that the magic had only compounded with time.

Interestingly, when I had learned Elizabeth McGovern was living in the UK, I reached out to her to ask her if she would pose for a photo for The Sweater Book.  I was going to be in England and took a chance.  I did it with a lot of celebrities and sometimes it worked, others it didn’t.  I don’t remember, quite, how I had reached out to her but one day I was sitting at home, at the table, doing some paper work.  I was listening to, of all things, the cast album of the Broadway musical RAGTIME.  A song was starting…

“I was once the lady friend of Stanford White, made me a celebrity overnight…”

The phone rang.  I answered.

“Hello, this is Elizabeth McGovern.”

I nearly fell out of my chair.  I told her about what I was listening to.  We both laughed about it.  We had the loveliest chat and we agreed to try to make a shoot happen when I was in town.  We hung up the phones and went on with our lives.  Sadly, my timing was off when I traveled to London and her reps informed me we were not in the same city at the same time.  No shoot.  And when The Sweater Book went to print, no Elizabeth McGovern.  Still, in spite of my sadness, I always remembered the story, the phone chat and it was enough.

My book was published.  It flopped.  And I settled down into a life of obscurity.

And then came Downton Abbey.

My husband and I were devoted watchers of Downton.  And in one episode when it looked like Cora might die I knew that I would give up the show if she did.  And, spoiler alert, she did not.   It was five years of heaven for me.  My devotion to Elizabeth McGovern was stronger than ever.

And NOW I was going to get to see my idol live, on Broadway.

I am very familiar with the works of Clifford Odets.  Also Terrence Rattigan, Tennesse Williams, a few other classic playwrights.  But I only ever saw or read one J.B. Priestley play and that was An Inspector Calls; so I really had no idea what to expect, what was in store for me, when I sat down.  And I won’t attempt to analyze the play because, if I’m being honest, I still haven’t quite figured out what it meant to me.  I have spent a good deal of my life thinking about the choices we make, the ripple effect, the what ifs and the shoulda, woulda, couldas.  It’s not that I regret the choices I have made in my life or don’t feel accountable for those choices.  It is, though, impossible for me to not reflect on the nature of the passage of time, particularly in a world obsessed with time travel.  I have found myself especially fascinated with stories in which an older self confronts a younger self.  The play/movie musical NINE, the Disney film THE KID, even a few moments in the brilliant film LIVING OUT LOUD are among the cinematic stories and theater pieces that fascinate me.  I sometimes feel the hand of baby Stephen, still in my own.  I wonder how many events in life have been caused by just one choice.

Time and the Conways is a brilliant study in how those choices can determine our destinies.

And it was all completely new to me.  An unknown story unfolding before my eyes, directed with astonishing astuteness by Rebecca Taichman and acted beautifully by a company that appears so invested in their roles as to represent, not characters but, real life people that I was watching through a window.  The sound design at the most heartbreaking moments of the play seemed to rip, even harder, at a heart that is stitched and scarred as to appear as a patchwork quilt.  It was, truly, one of the trips to the theater that I will not be able to forget.

And Elizabeth McGovern was there, leading the charge, her entire being open and vulnerable, strong and defiant.  How one actor can embody all the emotions, every dichotomy, harmony and conflict, softness and grit is beyond me.  I swear I don’t know how they do it but I do know that not everyone can do it like this.  The Lady is a force of nature.  And seeing her live validated, in me, my estimation of her brilliance from the days of my youth.  I was overwhelmed, in the extreme.  So much so that, as I stood in line to return my assistive listening device, I found it difficult to breathe, tears running down my face, my throat and chest clenched in some kind of emotional overwrought-ness.   Having returned my hearing aid and tipped the server (really, doesn’t everyone do this?  Because they should.) I joined my intellectual husband at the bar and he, seeing my emotion, asked if I was ok.  I could not speak.  This happens to me very rarely at the theater.  I can remember the times that I have been, thus, overwhelmed in a theater.  The  original production of M BUTTERFLY left me unable to actually leave my seat.  Each time I have seen SUNDAY IN THE PARK WITH GEORGE on Broadway I have been inconsolable during the curtain call – once I even drew sympathetic glances from the leading lady who spotted me in the front row, weeping.  The entirety of my visit to The Shakespeare Forum’s HENRY V left an indelible mark on my heart.  After the original production of ANGELS IN AMERICA my entire body was a bolt of electricity and leaving the theater after seeing NINE, I was unable to speak.  Then, of course, there was THE BRIDGES OF MADISON COUNTY, which left me bereft and elated after each of my five viewings.    Now this little play from the past which I had never heard of reached inside of me and flipped that ‘on’ switch, once more — something that happens on very special occasions, like the times when I get to watch my favorite actor, my husband, perform.  I knew that this was an important moment for me.

“I need to go back inside to the men’s room” was all I could say to Pat.

We re-entered The Roundabout Theatre and, as I did so, I could not believe my eyes.

Elizabeth McGovern was standing on the stairs holding a BCEFA collection bucket.  I always give to BCEFA but I have never seen the star of the play holding the bucket.  I have never seen a person so very famous standing in the lobby of a theater, holding a donation bucket.  And yet it did not surprise me.  This is just the way that the creator of the band Sadie and the Hotheads would be.  Natch, I should have expected this realness from my idol, Elizabeth McGovern.

I had given two ones to the hearing aid lady.  I had three ones left and a twenty.  Pat and I are very poor and make no pretense about it.  When people know you don’t have money they don’t expect you to pick up the tab or go to expensive restaurants.  Were it not for  tdf we would not be able to see plays like Time and the Conways – but we have our priorities.  Bills and theater.  I took the remaining singles from my wallet and approached Elizabeth McGovern, who was talking to someone.  I didn’t want to bother her or take much of her time.  I dropped the singles in the bucket and she looked at me and said thank you.

She thanked me again.

“I am destroyed by this play.  I am in shock over how much today has moved me.  I’m just destroyed.”

“THANK you.  It means so much to hear you say that.  It really does.”

And I thanked her again and turned, respectfully, to leave.

And I walked smack dab into my friend Anita Gillette, approaching Elizabeth McGovern to say hi.  Anita and I hugged, she and Pat hugged and then we two fled, turning around ever so briefly to see two great American actresses falling into each others’ arms.   Then, before the tears on my face had time to dry, they were frozen in place by the gust of winter wind that hit us as we stepped, silently, contentedly and oh so very satisfied out into 43rd Street.

If you look at the world the right way, there is magic and surprise everywhere.  This was one of those magical surprising days that I will always, always remember.  As I have always remembered that amazing actress from Ordinary People. 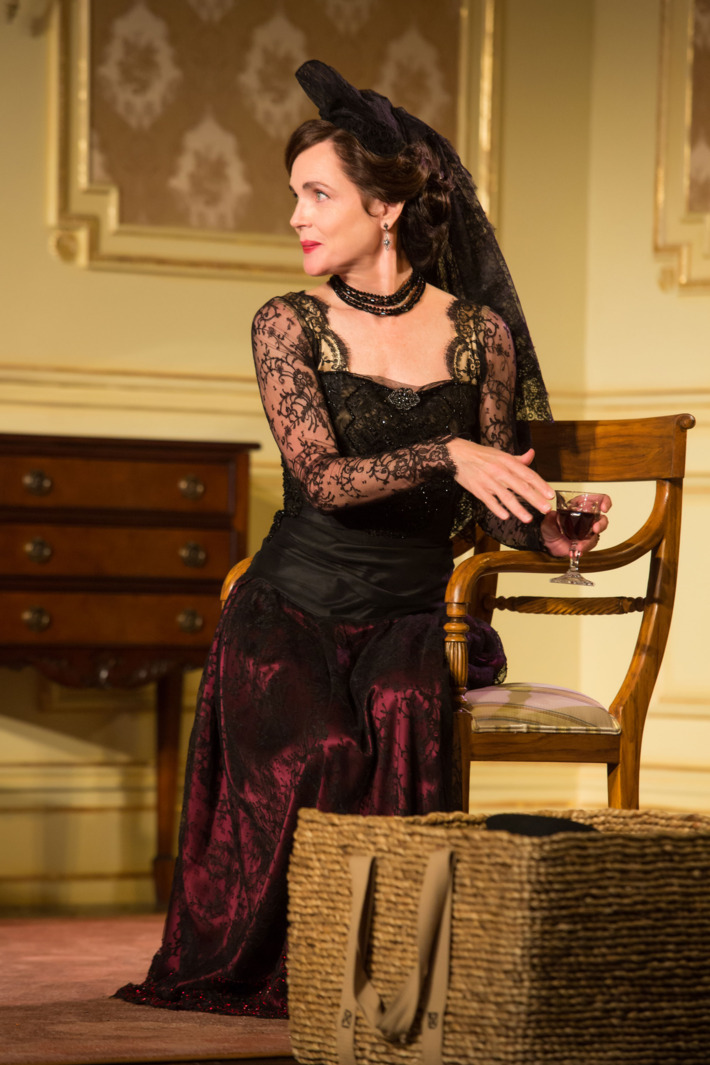