My editor from EDGE gave me an interesting assignment, a bit daunting because I tend to be, publicly, a bit of a Pollyana.  Privately, I’m very different.  When Bobby told me that the October issue of EDGE was the NSFW issue and that I had to write a column about losing weight while having sex, I grew intimidated and delayed writing it for a long time.  Finally, through research and interviews, I found myself with a story of which I was actually quite proud.

Here is the story that I submitted (Bobby often has to edit my verbosity down for the magazine) along with a screen grab of the story the way it appears on our readers’ ipads. 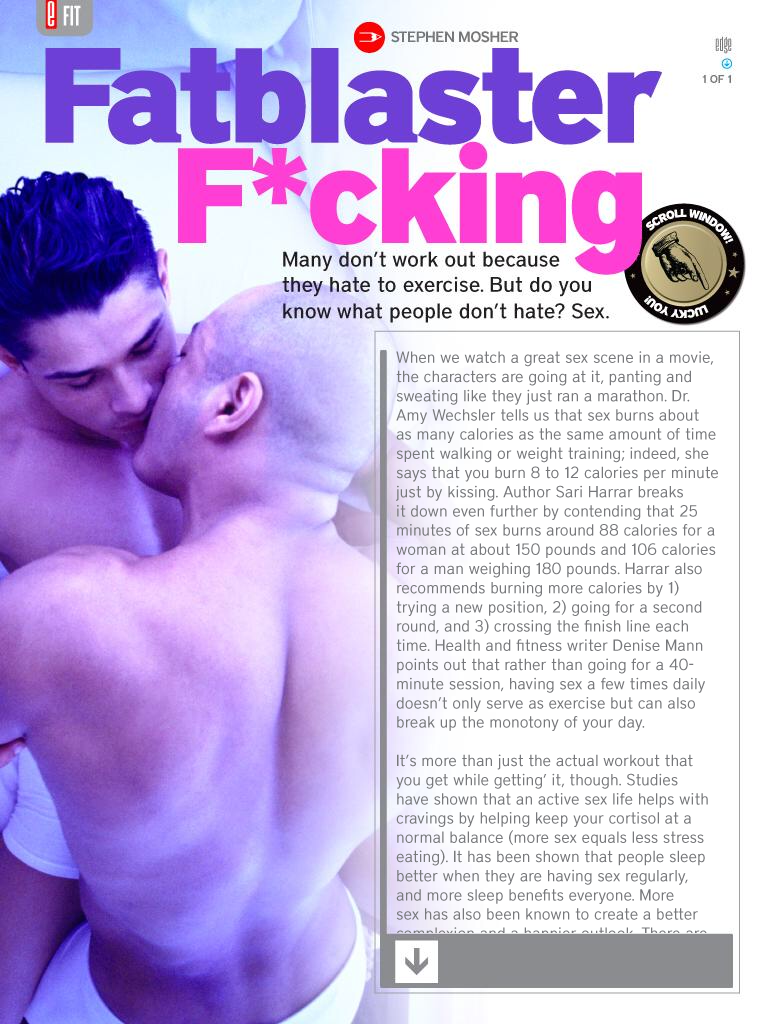 Many don’t work out because they hate to exercise.  It is a common sentiment.  “I hate exercising.”  What is exercise, though?  If googled, the definition of exercise is “activity requiring physical effort”.  People hate exercise; but do you know what people don’t hate?  Sex.

When we watch a great sex scene in a movie, the characters are going at it, huffing, panting, sweating like they just ran a marathon.  Dr Amy Wechsler tells us that sex burns about as many calories as the same amount of time spent walking or weight training; indeed, she says that you burn 8 to 12 calories per minute just by kissing, less than you burn in the same minute by walking.  Sari Harrar breaks it down even further by contending that 25 minutes of sex burns around 88 calories for a woman at about 150 pounds and 106 calories for a man weighing in at 180 lbs.  Harrar also recommends burning more calories by 1) trying a new position 2) going for a second round and 3) crossing the finish line each time.  Denise Mann points out that, rather than go for a forty minute session, having sex a few times during the day doesn’t only serve as exercise, it can break up the monotony of your day.

It’s more than just the actual workout that you get while gettin’ it, though.  Studies have shown that an active sex life helps with cravings by helping keep your cortisol at a normal balance (more sex equals less stress eating).  It has been shown that people sleep better when they are having sex regularly and more sleep benefits everyone.  More sex has also been known to create a better complexion and a happier outlook.  There are even those who have pointed out that when you are fit, you want sex more often, which makes you even more fit, which gets you laid even more.  We’re looking at a cycle that’s less vicious, more delicious.

After reading the stats and details on this topic, I decided to go to the people.  I asked some of the more sexually active people I know, personally, (trust me, they are active) what gives them the best workout during sex?  A gay man whose sexual position is that of a top told me “When you (have sex with) someone doggy style there is nothing but sex and you get yourself worked up doing it.  When you have sex missionary, there are stops, there is kissing, there is connecting.  From behind is just purely animal.  “A gay male I know who is versatile says “If I’m bottoming it would be me standing over a big (man) and squatting down on it and doing all required movement.  If I’m topping it would be me in perfect pushup position with the guy on his back under me, legs pinned back through my arms and me up on my toes and hands…”   A woman I know who owns her bi-sexuality tells me that, whatever sex her partner is “Don’t be in such a hurry to make each other (climax), since one of you is basically just going to lie there.  Spend some time.  Since it’s so hard to make each other (climax) when you’re lying on top of each other, you BOTH have to work at it.  Spend a little time; make it last, work a little harder for each other.”  My go-to when it comes to the heterosexual male POV tells me “My favorite calorie burning position is to stand upright and pick the girl up by her butt so she’s facing me and I’m supporting all her weight.  It’s quite the workout since you have to initiate most of the movement; plus it’s one of the few positions where you get any back work, which we men could always use more of” and the most voracious man I know says “For me the best workout in sex is the humping part. The active resistance between our bodies is a great warm up that makes my heart rate pump and I start to sweat.”

In researching this story I found that some of the popular sex positions that get peoples’ hearts racing were exactly the ones that the people I interviewed named.  The man who likes the Cowboy position (the woman echoes his thoughts on this, naming it a powerful workout) points us in the direction of some deep squats.  Our straight boy shows us a good leg, back and core workout for the man who is standing, while it is a good arm and core workout for the woman or man who has their legs wrapped around their partner.  The man or woman who is getting it from behind has to work their quads, glutes and core (bracing for impact) but if they are propped up against a wall, it works their arms and shoulders too.  And if you do yoga and are strong, trust me: try the Bridge and Arch positions.

There is even an app to help the heterosexuals with their fatblasting,  It is called Sexercise and it is available on Amazon for iOS users.  Research turned up no such app for non-hetties but it’s just a matter of time.  Maybe an EDGE reader will be the one to come up with it.  Frankly, I don’t think we need an app to find the right calorie burning sex workouts.  All we need is a workout buddy.  Remember: sex without love is just exercise.