Maggie Smith and The Sweater Book

I was incredibly nervous.

I was in London to shoot some of the great stars of the English stage and screen for The Sweater Book.  My husband, Pat, and I are both enormous fans of the actors of Britain.   We have been watching them work on film and on British tv for all the the nearly thirty years that we have been a couple.  Dame Maggie has always been a particular favourite of ours, indeed, she is Pat’s favourite actress.  We see every frame of film she shoots and always relish her performance.  Naturally, I was beside myself when my letter to her, asking her to appear in THE SWEATER BOOK, was responded to with an affirmative.

We arrived in England and the first photo shoot that we did was with a charming and delightful young man named Christopher Larkin, who happened to be Dame Maggie’s son.   We went to Chris’s home and visited and then shot his photo in a favourite pub of his.  We, then, spent a few days hauling lighting equipment (and a transformer that made our American equipment work on the English current – an extremely heavy item) all around London and its’ outskirts, doing photo shoots with the great actors of England.  On this day, we were set to photograph Dame Maggie Smith.

TALKING HEADS would be the first time we would see Dame Maggie live.  A few years later, we sat front row for THE LADY IN THE VAN.  To see Dame Maggie onstage is to understand what it is that makes theater; and TALKING HEADS thrilled us, to no end; though, I must admit, from time to time, watching the play, I found myself thinking that, soon, we would be photographing Maggie Smith.

I had been nervous but the nerves were definitely made worse by comments made by people I encountered in the days before this shoot.  Given the tone of these comments, I expected a formidable woman who would terrify me and refuse to wear a garment that had been worn by so many other people.  And, as we approached the stage door, after the play, I was quaking in my boots.  A person appeared before us and told us that Dame Maggie had visitors and would we mind, terribly, waiting until their departure.  Well, of course we would wait!  And I smiled at the person and quaked in my boots.  After awhile, a man appeared to escort us through the stage door, into the theater, down the stairs to Dame Maggie Smith.

He looked at me.

“Do we call her Miss Smith?  Or Dame Maggie”

He replied:  “I think she rather likes Dame Maggie.”

Down the last three steps and we were there, in the hallway where we would find one of the greatest actresses of all time, who may or may not be intimidating and difficult; who could know?  I watched the man as he turned the corner into the room.  Pat and I followed him.  The dressing room was sweetly and delicately lit; the furniture was tasteful antique in nature and the walls were a rich and lustrous shade of rosy pink.  Two strangers stood before us, talking to .. yes, that was her – Maggie Smith.  When we entered, she turned her eyes from her guests to us and smiled.  The man who had escorted us in made introductions and Dame Maggie followed suit by introducing us to her friends.  Handshakes and hellos and they were gone.  Pat and I were alone with Maggie Smith.

Dame Maggie gave us her undivided attention.  I explained to her that I would need to take a few moments to set our lights, so why didn’t I let (her biggest fan – a phrase I did not use) Pat show her some photos we had already done for the book.   They sat at her dressing table, flipping through pages of the portfolio while Dame Maggie, in her inimitable style, remarked on photos of friends and colleagues.  In particular, she had witty things to say about pictures of Dulcie Gray and Michael Dennison, Carole Shelley and her friend Whoopi Goldberg.  Pat and I delighted in hearing the voice that we could quote from MURDER BY DEATH, SISTER ACT and CALIFORNIA SUITE, making comments on my own artwork.

The lights were set.

I handed Maggie Smith The Sweater.

Without comment or concern, she slid her arms into the sweater and pulled it up over her shoulders.

Dame Maggie sat down at her dressing table, her chosen location for the photo and I suggested that I simply shoot her, naturally and organically, in her space.  Pat sat in a chair next to the table and, while I worked, moving about the room, shooting over her shoulder and in the mirror, they had a pleasant chat about life, her work as an actress, his work as an actor and all the pleasant and charming things one talks about with a legend who, it turned out, was quite down to earth and, not at all, intimidating or scary.  It was one of the great days in my career and in my life.

The very friendly man who had seen to us since our arrival had asked me, expressly, to not let the shoot go on too long, as Dame Maggie needed to rest between shows.  Out of respect for this request and, indeed, for the lady, I wished to accommodate them both and I shot one, and only, one roll of film.   I saved two frames of film and, as we wrapped, I asked Dame Maggie for one final favour.  Would she do a photo with Pat, who was so great an admirer.  Her reply was instantaneous and without thought:  But of course.

In the mirror, I shot two last photos; then I broke down all my lights and packed up to leave, allowing the two artists a few more minutes to talk about life and the theater.

Dame Maggie took the sweater off and handed it back to me with a hug.

She walked us from the dressing table to the door of her pastel pink dressing room and I turned to say thank you, one last time.

As we climbed the stairs to the street, following the pleasant ambassador to Maggie Smith who had, so perfectly, cared for us this entire time, I said out loud “I can’t believe we photographed Maggie Smith.”  He turned over his shoulder and said to me “Your lucky.  She doesn’t do this very often”.  Do what, I wanted to know.  “Allow people to photograph her as herself – outside of a character she is playing.”

“Her son called her and told her you were okay.”

Wow.  God bless Chris Larkin.  And God bless Maggie Smith.  Together, they gave me, not only one of the great days of my career and of my life:

They gave me one of the great photos.  One of my absolute favourites. 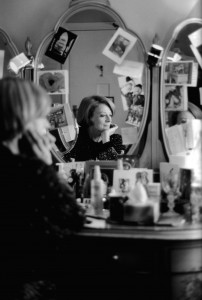